When I was a child, my parents told me that I could be anything I wanted to be if I put my mind to it. I could be a doctor, a lawyer, a singer, a firefighter, anything my little heart desired.

As I grew older and became more aware of societal gender dynamics, I noticed that, outside of what my parents taught me, the “You can be anything you want” mantra regarding women was very watered down. In fact, it was very specific.

Women are taught that being a “respectable, classy lady” is the ideal and anything outside of that mold is being a “hoe.” So many times I’ve seen people–especially cishet men–say that women are either pretty or smart or sexual or studious. We either know how to twerk or know how to read a book. Never both. If we don’t fit in one box, we’re placed in another.

But you know what? What if I told you that women are capable of being both? Can you imagine? Women can be both smart and pretty. Women can know how to throw that ass in a circle on the weekends and know how to stay studious and productive throughout the week.

A couple of months ago, Ayesha Curry, basketball star Steph Curry’s wife, made a statement on Twitter saying that she likes to keep “her goods covered” for her man and it just sparked a whirlwind of sexist binaries crafted by Ashy Nigga and Pick Me Twitter. 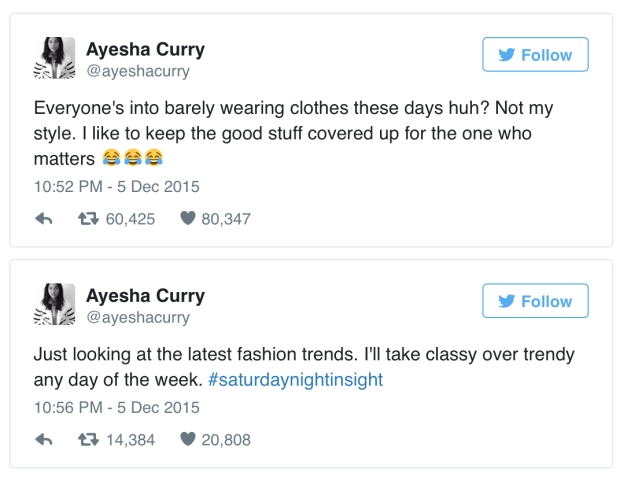 Now, I believe it’s dishonest to say Ayesha was simply stating a “preference.” Stating a preference is saying, “I just prefer to keep it covered up. No shade to those who don’t though.” Tone means everything. “Keeping it covered for the one who matters” and “classy over trendy” were both coded statements. Below the surface there is obvious condescension towards women who do not choose the so-called “classy” style of dress. What trips me out is that she then swooped in and was like “Wait, don’t put down others because of my tweet.” Honestly, I think she just said that because of the amount of backlash and drama her tweet sparked.

Let me also clear up that women do not hate Ayesha for being modest. I personally do not care if a woman chooses to live her life that way. The issue was that she was condescending in expressing that. Be “modest.” I don’t care but don’t sit here and act like you’re better because you chose the traditional route.

But anyway, that’s beside my point.

Ever since Ayesha’s tweets took Twitter by storm, people have been off the chain with comparing her to women such as Cardi B, Amber Rose, and Kim Kardashian–women who are deemed as “immodest” and “immoral” because they unapologetically showcase their bodies and sexuality.

There have been so many tweets saying that women are either like Ayesha or Cardi B. My thing is this: I am neither Ayesha or Cardi. I am myself. I am Candace. I only know how to be Candace. In fact, I know this is such a far fetched idea for most, but women are individual beings. We all have a myriad of characteristics, emotions, thoughts, feelings, dreams, and desires. We are not a monolith. We are not simple enough that you can just compartmentalize us.

Often times, women are reduced to our sexuality. Our worth, according to others, is contingent upon our sex lives and how we present ourselves in terms of dress. It’s never about how we treat others but about superficial things such as what we do in the bedroom and what clothes we choose to put on our backs. It does not matter if you’re a loving woman with big hopes and dreams. If you do not fit this respectable mold, if you had sex with one too many people or anything that isn’t “lady-like”, you’re now unworthy of respect and you are now only seen for your sexuality. How bogus and shallow is that?

I remember when Amber Rose slut walk happened last year and a video of her crying during her speech about Wiz Khalifa and Kanye West started circulating. People mocked her and invalidated her feelings because she was a stripper and apparently, according to people, strippers are not people who have emotions too. How dehumanizing is that? Because a woman chose sex work as her profession, you invalidate her pain? Amber Rose is human just like the rest of us. She’s a mother, a feminist, a fashion mogul, and a model but above all she’s a person with feelings just like us.

People are lazy, you know. To have to accept that women can be multiple things at the same time would require them to acknowledge that women are complex human beings who are capable of their own thought, emotions, and agency. Simply putting women in boxes and only respecting one kind of a woman is a lot easier to do in a patriarchal society that tells you women can only be either or.

What’s funny about this fetishization of Ayesha Curry is, if she had not been conventionally attractive (light skin, slim, green/hazel eyes, etc.), none of these men would have cared about her “keeping it covered for her man.” In fact, if she did not fit into their idea of what is attractive, knowing cishet men, they would have said something along the lines of “Good. You should keep it covered. Ain’t nobody wanna see that.” She would have remained known as “Steph Curry’s wife.”

Men claim women like Ayesha are the only respectable type of woman but they don’t even respect Ayesha. They weaponize her entire existence and use her against other women. They don’t actually respect Ayesha as a whole ass human being. She’s merely a fantasy and an ideal to them. If Ayesha up and decided that the modest life wasn’t for her, there goes that respect these men claim they have for her. Hell, they don’t respect women like her in general. Modest women are still harassed on the street. They are still verbally, physically, and emotionally assaulted just like so called “immodest” women. In fact, a good number of these same men who claim Ayesha > Cardi, would cheat on a woman like Ayesha with a woman like Cardi. The irony is absolutely delicious. I can’t. Simply showing that neither woman is respected at the end of the day.

If you only see one type of woman as worthy of respect, you don’t actually respect women. You’re still sexist. That’s like a white person saying they can only respect one kind of black person and then claim they’re not racist. A person has to present themselves in a tired ass mold for you to show them common human decency?

Recognize that, as a woman, I am just as multi-dimensional as you. I love to read Toni Morrison books and essays and I’m also a sexual human being. I love to go out with my friends on the weekend but I also have my nose in my books during the week. I laugh. I cry. I dream. I smile. I desire. I suffer. I succeed. I fail. I love.

I am human too.

Until you stop seeing women in a binary and as people whose humanity is just as valid as your own, you still have a lot of work to do and you’re still not getting it.

15 thoughts on “The Obsession with Compartmentalizing Women”